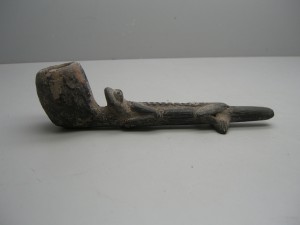 Last week we were contacted and asked to undertake a small house clearance in Brighton. Among a few of the items we found was this Mayan effigy pipe used for “religious” purposes probably by the Mayan Indians, Nicely carved Lizard on the pipe Size 18cm length x 3cm width. It had a small piece of paper that read: This was found in a ruined temple, Chipas, Mexico. Summer 1986. Effigy pipe, age c1250 AD.

In the jungles of Chiapas, México, the Ancient Maya Civilization constructed an incredible city. It is the biggest one in the state of Chiapas and one of the most important Maya cities, but still, its original name is a mystery. The Maya centres of the southern lowlands went into decline during the 8th and 9th centuries and were abandoned shortly thereafter. This decline was coupled with a cessation of monumental inscriptions and large-scale architectural construction. There is no universally accepted theory to explain this collapse.

We have carried out house clearance in Hassocks, Preston Park, Burgess Hill, Plumpton Green, East Grinstead, Haywards Heath, Hove and found many interesting items but as we were carrying out this house clearance in Brighton we found this curious pipe.