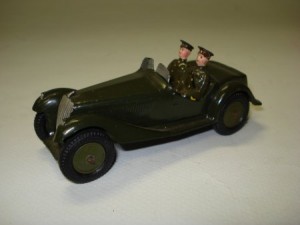 Last week we undertook a house clearance West Sussex and hidden in the clearance was this wonderful Britains Army staff car.

The W. Britain brand name of toy and collectible soldiers is derived from a company founded by William Britain Jr.

A British toy manufacturer, who in 1893 invented the process of hollow casting in lead,

By 1966 safety regulations in the United Kingdom combined with rising costs halted the production of lead toy soldiers.

Britains shifted most production of Herald plastic to Hong Kong from 1966. In 1976 Britains started Deetail plastic figures with metal bases that were initially manufactured in England but later were manufactured in China.

‘Metal Models’ continued to appear in the main Britains catalogue during the 1980s until 1987 when it was finally decided that these lines were collectibles rather than toys. They were given their own special four page catalogue. During the late 80s the popularity of these new metal toy soldiers continued to grow with collectors the world over, until finally in 1993, the W. Britain Centenary, the W. Britain Collectors Club was launched. The Club still continues to this day and has thousands of members scattered around the globe. Yearly membership to this exclusive club includes four club magazines per year (quarterly), catalogues, special vouchers, and a choice of exclusive Club figure as well as regular updates on everything to do with W. Britain toy soldiers.