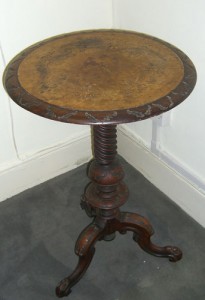 Last week we were contacted and asked to undertake a small house clearance in Burgess Hill. After clearing the whole house we check the loft and this was the only item up there.

Thomas Chippendale was a London cabinet-maker also a furniture designer in the 1750’s, English Rococo, and Neoclassical styles.

In 1754 he wrote a book of his designs, “The Gentleman and Cabinet Maker’s Director”

The designs are regarded as setting the fashion for furniture of that period and were used by many other cabinet makers.

Chippendale’s book was used by many other cabinet makers.

His favorite wood was mahogany; in seat furniture he always used solid wood rather than veneers. His workshop was continued by his son, Thomas Chippendale, the younger (1749–1822), who worked in the later Neoclassical and Regency styles.

A bankruptcy and sale of remaining stock in the St. Martin’s Lane premises in 1804 did not conclude the firm’s latest phase, as the younger Chippendale supplied furniture to Sir Richard Colt Hoare at Stourhead until 1820 (Edwards and Jourdain 1955: 88).

Chippendale’s designs became very popular again during the middle to late 19th century, leading to widespread adoption of his name in revivals of his style. Many of these later designs that attach his name bear little relationship to his original concepts.

Just how did this table find it’s way to a house clearance Burgess Hill ?